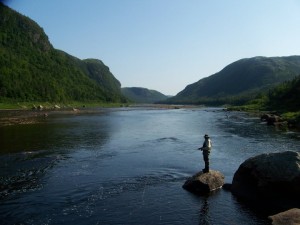 The Newfoundland fishing regulations are strictly enforced with virtually every river being stealthily patrolled. Typical fines average $1000 for each illegally caught fish AND forfeit of vehicles and gear used to transport you to the location and catch the fish. The Department of Fisheries and Oceans coupled with the Inland Fish and Wildlife Division of the Department of Forest Resources and Agrifoods develop and enforce recreational fishing regulations in Newfoundland and Labrador. Below is a summary of the most pertinent and enforced regulations

A salmon may only be angled by hook and line. The hook has to be a non-weighted artificial fly with a single hook. Bait, metal lures, and double and triple pronged hooks are prohibited. Beginning in 1999, only barbless hooks may be used for angling on all scheduled salmon waters in Newfoundland and Labrador. You may bend down the barb of a hook to make it legal or “effectively barbless”.

There are virtually no restrictions on trout fishing on non-salmon waters other than bag limits. Trout may be fished with bait and/or artificial lures on non-scheduled lakes, streams, and ponds.

Rivers are classified by the Federal Department of Fisheries and Oceans based on the strength of the salmon run.

Class I
For the Humber River (on this river only) the season retention limit will be 6 salmon. The Gander and Exploits river has a season limit of 4 salmon. The daily catch and release limit is 4. Class 1 rivers will not be closed to angling as a result of environmental conditions such as low water levels and high water temperatures. The Lower Humber and Gander River will have a fall fishery for trophy salmon which closes in October.

Class II
Approximately 130 rivers with healthy numbers where the season retention limit will be 4 fish. The daily catch and release limit is 4. Class II rivers will be closed to angling if water levels are low and water temperatures exceed 220C

Class III
Rivers where there are conservation concerns where the season retention limit will be 2 fish. The daily catch and release limit is 4. Class III rivers will be closed to angling if water levels are low and water temperatures exceed 220C.